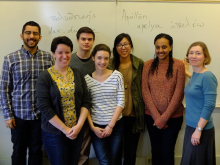 Classics faculty, as usual, have been keeping busy with many interesting and innovative research projects.  Sarah Levin-Richardson's recently published work on graffiti and other aspects of the material world at Pompeii reads the writing on the wall to illuminate the lives and experiences of women and men who usually slip through the cracks of history. She completed the project while she was spending a year in Rome as the holder of the Andrew Heiskell Postdoctoral Prize at the American Academy in Rome.

Kate Topper brings her expertise in the material world of the ancient Greek world to the investigation of the complex and far-flung world of the Hellenistic banquet. Her study of the huge party boat of Ptolemy IV was a show-stopper at the annual meeting of the Society of Classical Studies and proved that the mega-yachts of today's billionaires are nothing new under the sun.

Deb Kamen's research explores the cultural and social history of ancient Athens. She keeps her expertise on Athenian strategies of insult and abuse strictly separate from her role as Graduate Program Coordinator, where her thoughtful and constructive approach are much appreciated by all.

Alex Hollmann has received an NEH-Albright Fellowship and a Loeb Classical Library Foundation Fellowship to support his work on magical and private religious practices in the ancient Mediterranean. Along with collaborator Robert Daniel of the University of Cologne, he is utilizing innovative imaging to decipher and publish curse tablets from Antioch.

Sarah Stroup is contributing her perspective on the Roman villa to a 2017 National Endowment for the Humanities Summer Institute titled "City/Nature/Urban Nature."

Olga Levaniouk's chapter "Homer in Indo-European Myth" is forthcoming in the Cambridge Companion to Homer. She presented "In one Night: Space and Time in Ancient Greek Wedding and Related Myths" at an International conference at the University of Patras in Greece. Students in her microseminar ‘Greek Etymology as Cultural History in the Work of Gregory Nagy’ have begun producing a Concise Inventory of Greek Etymologies.

Stephen Hinds is writing a book on the ancient and early modern relations of Latin literature, to be titled Poetry across Languages.  His work for this project, during a year of NEH Fellowship in 2014-15, included two lectures as Distinguished Visiting Scholar at UCLA’s Center for Medieval and Renaissance Studies, and has taken him as far afield as the University of Campinas, Brazil.

Alain Gowing spent Fall and Winter Quarters on well-deserved leave after stepping down as Department Chair and led the department's Classical Seminar in Rome in Spring Quarter. His chapter 'Memory as Motive in Tacitus' was published in Memory in Ancient Rome and Early Christianity (Oxford 2015).

Ruby Blondell, the Byron W. and Alice L. Lockwood Professor in the Humanities, presented four lectures from her book project on Helen of Troy in early cinema as the prestigious Martin Lectures at Oberlin College. Her co-edited collection Ancient Sex: New Essays appeared this year, and she left no stone unturned in chairing the organizing committee for the very successful Seventh conference on Feminism and Classics at UW.

Jim Clauss is co-editing and contributing to a volume titled Gods in Poetics. Under his direction the undergraduate seminar in Classics incorporated student portfolio presentations comparable to those produced by students in the Honors program as well as collaborative research presented at the Undergraduate Research Symposium.