How and Why to Talk to a Dictator about Philosophy, Poetry, and Dancing Naked: Cicero and Caesar in Cicero's speech Pro rege Deiotaro 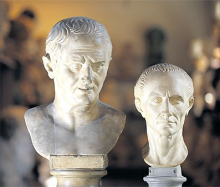 What happens to judicial rhetoric in a dictatorship?  If justice depends on shared values, what happens when one person is the arbiter of truth?  How can you talk to a judge who is also the jury?  This paper sees Cicero's speech on behalf of the Galatian king Deiotarus as providing one Roman's response to those questions.  Cicero delivered the speech, not to a jury in an ordinary court, but to Julius Caesar, then dictator, in his own house—in defense of a man accused, among other things, of plotting to kill him.  The very style of Cicero's rhetoric—the tones of voice he chooses and the discourses to which he appeals—reveals his attempt to negotiate the strains placed by Caesar on rhetoric, political relations, and civic identity.

Brian Krostenko is Associate Professor of Classics at the University of Notre Dame in South Bend, Indiana.  Krostenko’s research centers on the culture of the Late Roman Republic, Cicero, rhetoric, and Latin linguistics.  In particular he is interested in using linguistic models as tools for rhetorical and cultural analysis.  He is the author of Cicero, Catullus, and the Language of Social Performance (Chicago, 2001), which discussed the problem of aestheticism in Roman culture by means of historical semantics.  He is currently completing a study of the rhetoric of Cicero's de lege agraria I and II which uses discourse pragmatics to reveal Cicero's attempt to direct two different audiences to the same end.