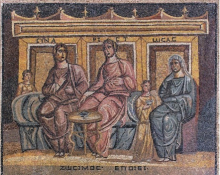 This talk will consider what happens when ancient New Comedy (Menander, Plautus, Terence) is studied with focus on female characters and their plots, rather than on hapless lovers and enslaved tricksters.  The result is a much broader view of Greek and Roman society, with surprising information about women’s lives.

Dr. Sharon L. James is a professor of Classics and an adjunct member of both Comparative Literature and Women’s and Gender Studies at the University of North Carolina, Chapel Hill. She specializes in Latin poetry, women and gender in antiquity, New Comedy and Italian Epic. She has co-edited several books on the complex representation of gender in the ancient world, including A Companion to Women in the Ancient World, which was recognized as a Choice 2013 Outstanding Academic Title of 2012. Dr. James has also published numerous articles on the subjects of Ovid, Roman comedy, elegy, Menander, Vergil, literary theory, and teaching the subject of rape. Her current book project, now in revision, is a large-scale study entitled Women in Greek and Roman New Comedy. Her next major research project will focus on rape and the social meanings of the female body from Greek myth to the contemporary world.