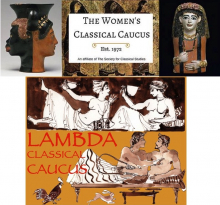 Members of the University of Washington Classics department received multiple awards at this year’s SCS/AIA meeting. Sarah Brucia Breitenfeld won the Lambda Classical Caucus Graduate Student Paper Award for a paper on “Aspasia, Cratinus and Hesiod Walk into a Bar...: Marital Invective in Cratinus’s Cheirons,” delivered at the Classical Association of the Pacific Northwest conference in March 2018. In a close reading of Cratinus fr. 259 K-A, SBB argues that the comic playwright, playing with imagery from Hesiod, levels an attack on Aspasia’s marital status in light of Pericles’ citizenship law of 451/0 BCE. Prof. Ruby Blondell, in turn, was the recipient of the Women’s Classical Caucus Leadership Award, given by the WCC to an individual for an outstanding contribution in encouraging women to enter and remain in the field of Classics. As one of Ruby’s former students said: “Thank you, Ruby, for setting such a high bar with your scholarly rigor, personal integrity, and your inimitable individual flair. We may or may not meet that bar, but we’ll have a lot of fun trying.” Congratulations to both SBB and Ruby!