Another spring, another successful Rome Program! 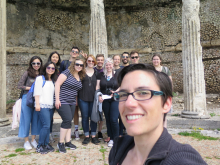 Prof. Levin-Richardson and her students at Praeneste
View gallery

The 2018 Classical Seminar in Rome was a success thanks to faculty director, Sarah Levin-Richardson, two graduate Teaching Assistants, Edgar García and Josh Zacks, ten dedicated undergraduate students, and the support of donors whose gifts helped make the program and the students' travel to Rome possible. This year's seminar focused on religious experiences of ancient Rome.  Highlights included day trips to the Sanctuary of Fortuna at Praeneste (where, according to legend, a young illiterate boy would draw fortunes from a wooden chest, like ancient fortune cookies), and a rare glimpse at the tombs of Isola Sacra, the ancient cemetery of poor and middle class workers of Rome’s port. A three-day fieldtrip took the program to the Bay of Naples, where they not only saw the well-preserved Greek temples at Paestum and the ruins of Pompeii, but they also got to explore the Cave of the Sybil at Cuma (where Vergil's Aeneas received a prophesy of hard times to come) and glimpsed one of the most famous portals to the underworld, Lake Avernus.

As in previous years, students deeply appreciated the chance to bring their study of the ancient world to the places where it all happened. Student Yiru Luo, a reporter for the UW Daily,  wrote that through the chances to explore Rome's ancient past 'The Romans stood vividly around me'.  Click HERE to read more about Yiru's experience.

The program, in which students live in apartments in Rome's historic center and enjoy the chance to do their own grocery shopping and cooking, offers a bracing variety of new experiences. Before the program, one student writes, I “had not lived in another country for an extended period, had not lived with relative strangers for more than a week, had not had to navigate without either help from parents or with electronic maps, had little knowledge of who the Etruscans were, had no idea how to tell Hellenistic art from Classical art, didn’t know what the word apotropaic meant, had never hear of EUR, didn’t realize just how many versions of gods and goddesses there are, didn’t know what mystery cults were, didn’t know my emperors past the Julio-Claudians, only knew Hadrian from Hadrian’s wall and not his fanciful architecture, and did not even know how to pronounce Trastevere.” Because of the Classical Seminar in Rome, “I have done and learned all these things and more!”

Learning to read Rome's long and complex history from its streetscapes was challenging and exciting. I “knew nothing about Mussolini’s building and destruction projects, which was extremely interesting as I’m fascinated by the way historical narratives are displayed and curated” writes a student.  “I also am very grateful to have been able to experience these places of ancient Rome, because even though I’ve seen pictures and videos, there’s no substitute for physically being in a space to understand it.” Because of the Classical Seminar in Rome, I “know a little Italian! Also, I probably would not have taken Latin if I wasn’t in this program, and even though I’m not great at it, it’s exciting just walking around Rome and Italy and being able to get the gist of ancient inscriptions. I’ve actually really liked and felt proud when I could understand and convey the words on the wall (most recently at St. Peter’s Basilica).”

At Pompeii, writes another student, “getting to see not just isolated and carefully curated monuments, but an entire city was truly amazing and felt like I was going back in time. It remind me how densely packed with life the ancient world was and brought it to life in a way that textbooks and pictures can’t. It is one thing to read about the ancient world, it is quite another to stand in the middle of it.” Another student agrees:  “Seeing intact, standing cities like Ostia and Pompeii makes me humanize, and relate more to, the ancient past.”

The seminar's investigation of death ritual and burial practices at Cerveteri, Tarquinia, and Isola Sacra provided chances to reflect on the ways various kinds of people lived and died so long ago: “Both the variety and similarities between the places were really interesting, and as examples of death practices, wealth, and status they offered a lot of insight about the many types of people who were memorialized in those spaces. It’s also awe-inspiring to see architecture- and fresco-styles found in homes and buildings recreated in funerary spaces.”

Before the chance to travel to Rome for the program, a student writes, “I had an understanding of Rome in an intellectual and almost theoretical sense. It was a place that existed in textbooks, architectural plans, artists’ reconstruction, and the words of long-dead poets and orators. Rome was a puzzle, a distant place so filtered through modern scholarship that it seemed more like an academic thought experiment than a real place.” Because of the Classical Seminar in Rome, I “can see Rome in person. I can imagine more vividly the realities of the ancient past. There is a physicality to the world of Cicero, Ovid, Virgil, and Livy when there wasn’t before. This program brought history to life in a way nothing else can and I will be forever grateful for that.”