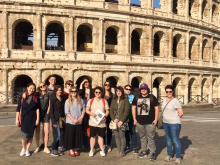 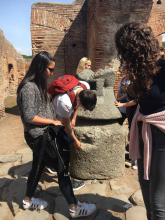 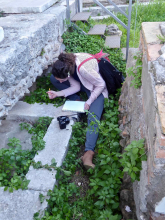 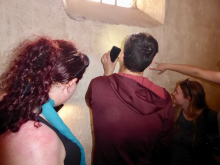 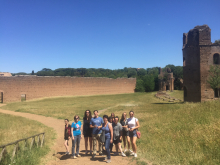 "today has been one of many incredible days"

"something I am eternally grateful for"

"embraced by the city's rich past"

These words made their way back to us from students who had the opportunity to participate in the spring 2017 quarter-long Rome Program.While in years past most participants have been majors in the Department with some experience in Latin and/or Greek, the program is open to all students and now attracts individuals from across the university with a passion for scholarly exploration of the ancient world.

The 2017 program was directed by Professor Kate Topper with assistance of graduate students Emma Brobeck and Anna Simas. Departmental funds contributed over the years by supporters of Classics continue to make it possible for us to construct a quarter full of excellent experiences while also keeping costs as manageable as possible for students and to offer funds in the form of bursaries to offset expenses related to travel.

Since its beginnings, the program has offered an unparalleled opportunity for investigation of  monuments, archaeological sites and museums in Rome and further afield. For Kate Topper this year "a big highlight was getting to go inside two of the temples at Paestum. It's so rare to be able to go inside a Greek temple -- much less two on one site -- and it was really exciting to be able to show students the architectural elements up close."

Professor Topper's seminar on houses and villas of Roman Italy plunged the group into the fabric of every day life in ancient times across all social and economic levels. "Some students came to the program as veterans of Alain Gowing's class on the Augustan age, Sarah Levin-Richardson's classes on Pompeii and Rome, and my class on Greek Painting," says Topper. "It was fun to watch them finally 'meet' the objects and sites they had studied in the classroom (and in some cases, written multiple papers on). Another thing I really enjoyed about this group was their eagerness to test scholarly hypotheses on our site visits. We spent a lot of time in class, for example, talking about the ways in which slaves would have physically experienced the space of a house or villa -- whether hunching over a stove or moving through certain corridors to which they were confined. Eager to try these arguments out for themselves on site, students often commented on how the experience of being in these spaces had changed their understanding of what we had read."

Simas and Brobeck were impressed with the undergraduates, whom Brobeck describes as "intellectually curious and passionate about their studies." Simas adds, "Something that really struck me about our students was how eager they were to immerse themselves in Roman culture. Our site visits usually consisted of a presentation about the history of that site, a 'guided tour' portion, and then time to explore the site on our own. Many of the students asked if they could walk around sites with Professor Topper, Emma, and me during the solo exploration time, because they wanted to learn more about the sites and ask questions about them: even when the students were given the opportunity for free time on a site visit, they often chose to make it a learning experience." She adds that this year's group had a special excitement about reading Latin inscriptions: "the students would often find an inscription and run to ask us to translate it or to help them translate it." Adds Brobeck, during a visit to the epigraphic museum at the Baths of Diocletian, "students saw and read funeral inscriptions and curse tablets, objects that give a glimpse into the lives of average Romans. Touched by several of the dedications that provide personal details of figures in the margins of history, they both critically engaged with the material and emotionally connected with it."  One student decided to take up Latin: " it was only as I gazed at the tantalizing coded fragments of funerary inscriptions that I made up my mind to try and learn it."

Students were enthusiastic in expressing their gratitude for the travel bursaries and awards that helped make possible their particpation in the program. Bryce Peel writes, "I saved for months from my wages at work, but I simply would not have had the money to do the program without the 1500 dollars provided by the bursary." He adds "The travel bursary allowed me to interact with the field of study that I love in a way which could never be matched in another context. And beyond that it has allowed me to trek on my own to see other ancient ruins and sites of historical importance from which I'm developing my own perspective on the field of classics and my study of history."  Cassie Marcotte describes the program as "one of the greatest experiences of my life." She says that the bursary is "something I am eternally grateful for," and adds, " I maximized the use of this money to allow me to see as much as possible.  I traveled to Florence, Lake Garda, Verona, and Venice all filled with so many amazing things I did not think I was going to be able to see." Scarlett Strauss, Art History '17, holder of this year's Ringland Rome Prize and headed for graduate school in Renaissance Art History next year,  describes her time in the Rome program as being "embraced by the city's rich past." Having studied the excitement of the humanists who rediscovered the ancient past during the Renaissance, she describes herself experiencing something similar: "I found myself following in the footsteps of humanists from centuries ago, who were just beginning to rediscover the ancient world buried beneath them." We look forward to another season of discoveries this spring when students join Professor Sarah Levin-Richardson for the 2018 Rome Program.