Celebration of Student Achievements and Awards 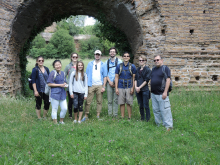 On the eve of UW's 2016 Commencement ceremony in June,  friends and family gathered in Parrington Forum to celebrate the varied achievements of students in Classics. Bridget Langley was awarded the Ph.D. and Anna Simas and Emma Brobeck completed M.A. degrees in Classics.

Also a matter for celebration are scholarship awards and prizes. Alexis Allen, Rachael Clark and Zoé Thomas were awarded Jim Greenfield scholarships during 2015-16, and Zoé Thomas was awarded the Harvey Densmore Scholarship for excellence in Greek.  Meg Greenfield Essay Prizes were awarded to Alexandra Holttum and Joseph Bringman, Jr.; Joseph is also this year's winner of the Latin and Greek Translation contests sponsored by the Classical Association of the Pacific Northwest. Jamie Ellis was awarded the Ringland Rome Prize. Awards from the Classics Student Travel Fund were made to Sarah Barrie and Zoé Thomas for study abroad. Friends of Classics scholarships were awarded to David Bloomsberg for summer language study and to Matthew Dirks for coursework to add endorsement in Latin to his teaching certificate. Fourteen students at three area high schools received Jim Greenfield Scholarships to support their enrollment in UW in the High School Latin 103 and six participants in the Rome Program received Jim Greenfield  Travel Awards. Among the Department's graduate students, Josh Zacks holds a Greenfield Graduate Fellowship and Edgar García holds a GO-MAP Fellowship while Fanaye Yirga holds a Graduate School Top Scholar Award and Matthew Gorey received a Chester William Fritz Scholarship. Support from the Phillip and Estelle Delacy Endowment made it possible for Daniel Miller and Megan O'Donald to participate in the Department's Seminar in Rome.

Students have communicated to us their deep gratitude for the opportunities and experiences made possible by the Department's supporters. One wrote from Italy to thank the Department  "for your generosity in helping fund my trip to Rome [to participate in the Department's Rome Program]. So far, it's truly been an amazing experience, and I can't think of a better way that I could have chosen to end my time at the University of Washington."  Another scholarship recipient wrote, "It is a blessing and an honor to be selected for such an award. This scholarship will greatly help me and my family with finances and enable me to focus more fully on my studies." As faculty we offer warmest congratulations to all.