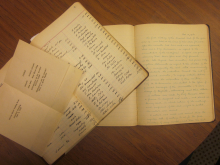 A group of students cluster into a small room, voices alternating between hushed and loud; laughter and whispers play within the corners of the space. They unwind layers of scarves and gloves and coats, clothing damp from the cold winter rain and draped over chairs and desks to dry in the heat of the classroom. Giggles and jostling turn to chairs scraping against the floor as they take their seats. The show is about to begin! The young scholars enjoy the spectacle of a world far removed in space and time. When the lecture is done, the questions answered, the students gather up their coats, unfortunately still damp and now cold, and thrust their arms through their sleeves to prepare to head back into the chilly January day but envisioning the warm hills and valleys of Italy or the rocky beaches of Greece. This scene may bring to mind the modern students of the University of Washington. And indeed, it is about the UW students of the classics department - just one hundred years ago.

The UW Classics department has a long and rich history, one that is has always featured the tradition of a closely-knit, family-like department. Professors and students alike forge close bonds with one another and encourage and support each other while working towards competitive awards, publications, and grades. In the early 1910’s, the early Classical Club met monthly, put on plays including Aristophanes’  Frogs, read papers, discussed authors, and took tea at the summer home of Dean Arthur Haggett, professor of Greek and a foundational member of this university. The Classical Club stayed active for many years after Dean Haggett’s death, and they began the tradition of hosting a banquet for the students of classics and affiliated faculty.

The Classical Club accounting ledgers still remain in the Classics office today, momentarily displaced to Condon Hall as Denny Hall is rebuilt. The ledgers have now been scanned and archived so that the records and achievements of our department for the last century can be preserved. The financial ledger records the long ago students who paid their dues. In 1931 Estelle Allen and Phillip Delacy each paid sixty cents for their dues to the Classical Club. In time they married and each became a professor.  Though they were students for only a few short years, they remained friends of the Deparment for the rest of their lives; their creation of the Phillip H. & Estelle Delacy Endowed Fellowship Fund will carry forward that legacy for future generations of students. Ellen Kohler too was an early member of the Club, and was a long-time friend of the Department. Gail Ingle was a member of the Club before she went on to teach Latin for decades at Seattle's Roosevelt High School. Wendell Clausen paid his dues of $1.25 to the Classical Club for the year of 1944-45. After graduating from UW, Clausen went on to receive his Ph.D. at the University of Chicago, and began his illustrious teaching career at Amherst College before moving on to teach at Harvard from 1959-1993.

We are so thankful that the bright and budding scholars of our past and present find such joy and excitement in our program. Generous donations of alumni and friends help this generation of students make the most of their time at the University of Washington. The Classical Club has returned to the Classics department this school year led by Gessica Adornato, Alexis Allen, and Mario Reichlin. Though the current club is small, it is carrying on the grand tradition of the UW Classics family and bringing support and energy to the community of students and professors here. Even though I am a senior and the days until I leave the department are dwindling, I carry the experiences I have had here happily in my heart. I came to the UW to study Classics, and study I did - I am grateful that I became a part of such a warm, encouraging, and brilliant community.