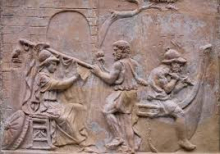 For the past nineteen years, on one day every spring undergraduate researchers from across the University fill Mary Gates Hall with presentations and posters that describe research projects they have conducted. The Undergraduate Research Symposium is one of the largest of its kind in the USA, and many other universities have adopted this format for showcasing student advancement of knowledge. Over the years many UW Classics students have had projects accepted for the Symposium and this year's event includes an entire session (3:30-5:15 Mary Gates Hall 284)  devoted to Classical topics.

The session, entitled “Miscellanea Classica: Beginnings, Endings and In-between,” includes a group presentation on “The Argonautic Expedition: The Evolution of a Mythic Narrative” presented by Joseph Bringman, Rachael Clark, Dick Russell, and Zoe Thomas. This collaborative project grew out of work undertaken in the Department's Undergraduate Seminar, led during WInter 2016 by Professor James Clauss. Additionally, students will be presenting their individual senior reserach projects: Joseph Bringman will present “Roman Imperial Deification and the Emperor Domitian as Dominus et Deus in his Lifetime”; Rachael Clark will present “Terrible Tresses: Hair as a Reflection of Death in Roman Culture”; and Zoe Thomas will present "Like Father, Like Son: An Exploration of Father and Son Heroic Pairs in Ancient Greece”.  The final paper of the session, by Art History major Taylor Glennon, explores “Roman Obstetrics in Funerary Memorials.” The Symposium is free and open to the public, and all are invited to support our undergraduates and celebrate their contributions to the knowledge of the Classical World!