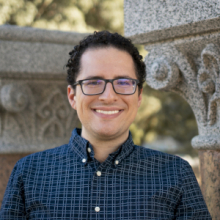 The Department of Classics is extremely proud of Dillon Gisch (B.A. 2013, summa cum laude, Classical Studies and Art History) for winning a coveted Arthur Ross/Andrew W. Mellon Foundation Pre-Doctoral Rome Prize! As an undergraduate at UW, Gisch was an outstanding student who won (among other honors) a Mary Gates Research Scholarship and a Jim Greenfield Scholarship. While in Seattle, he completed two honors theses (“Crouching Aidoia, Hidden Pudenda: A Comparative Study of Aidos, Kosmos, and the Crouching Aphrodite Type,” advised by Kathryn Topper, and “Seeing the Unseeable: Attis, His Peculiar Garment, and Representing Gender Nonconformity in the Heart of Imperial Rome,” advised by Margaret Laird) and briefly directed the Department of Antique and Modern Prints at Davidson Galleries.

Now a Ph.D. Candidate in Classical Archaeology at Stanford University, Gisch is completing a dissertation entitled “Replication and Difference in Images of ‘Modest Venus,’ 200 BCE–600 CE,” the project on which his research in Rome will focus. His dissertation examines Praxiteles’ lost Knidian Aphrodite but departs from conventional Hellenocentric interpretations of the statue, instead considering the so-called “copies” (the sources through which the statue is known) within the context of ancient Roman visual culture. This fresh and much-needed approach to one of the most famous statues from antiquity marshals evidence ranging from pre-modern texts to Volterran ash urns to Roman and Macedonian sculpture, taking full advantage of Gisch’s impressively broad training. Congratulations, Dillon, and we can’t wait to see what your research holds in store!