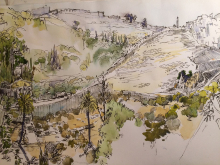 Alex Hollmann spent Autumn Quarter 2016 as an NEH Fellow at the Albright Institute in Jerusalem where with Associate Fellow Robert Daniel of the University of Cologne he worked on deciphering a fascinating collection of curse tablets from Caesarea in northern Israel.

These tablets are thin sheets of lead of inscribed in Ancient Greek. The decipherment is part of the Magica Levantina Project affiliated with the University of Cologne Center for eHumanities. Magica Levantina uses innovative techniques of digital photography known as Reflectance Transformation Imaging to read the tiny, faint writing inscribed on the small lead tablets, many of which call down curses on chariot racing teams that competed in the racecourse near where the tablets were found. The evidence of the tablets adds substantially to what is understood about magical strategies and practices in late antiquity and about the people who attended and performed in the spectacular races in the Circus (think Ben-Hur).

One tablet, pictured above in Hollmann's sketch, curses a professional singer and dancer working in the theater, also nearby. The spell calls on various underworld gods, including crocodile-faced ones, to bind the mouths of the spectators (presumably so they cannot cheer) and bind "the feet, the hands, the wrists, the sinews, the shoulders, the three hundred and sixty sinews of Porphyrius, also called Caecilianus, the dancer, tomorrow in the theater in his dance competition— now now, quickly quickly!"

When not deciphering, drawing, translating and commenting on the tablets for their upcoming publication in an upcoming Magica Levantina volume, Hollmann captured vivid Jerusalem scenes in his sketchbook, on view here and here.