4th-Graders Explore the Cosmos (with a little help from Classics!) 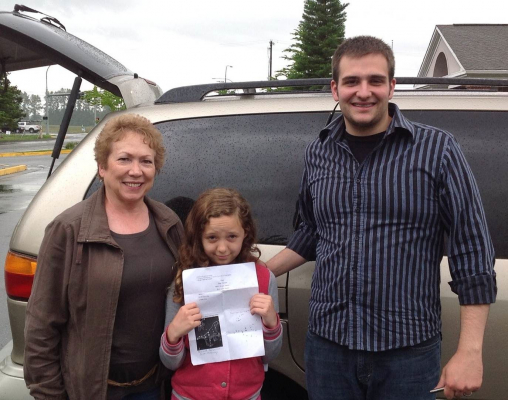 On June 16th, Dave Brodhead, a senior majoring in Classics and recipient of a Jim Greenfield Scholarship for 2012-13, and the department's own Professor Cathy Connors came together to provide young, 4th-grade students and their families the chance to explore the cosmos.

"I was looking for a way to get my students excited for university education," said Brodhead, who teaches a Sunday-school class each week, "and I knew that Professor Connors wouldn't pass up the opportunity."  The team prepared a day of activities, which included exploring the cosmos from both the ancient and modern perspectives.

The students and their families arrived at the University of Washington from Arlington, WA around 11:00 a.m.  They were greeted warmly by Connors.

"Welcome to college!" said Connors.  The students soon found themselves learning the great stories which have provided many names for mapping the heavens.

"As [Connors] was unfolding story after story, I felt like I was back in her class," explained Brodhead.  "She was teaching a group of varied age and experience, most of which, had no exposure with the Classics, yet she had all of our attention."

Madison Thomas (9, pictured with her grandmother, Ann Baird, and her teacher, Brodhead) had fun trying to draw the figures that are represented by the constellations.  Connors provided the handout as an exercise for the students.

Afterwards, the students and their families were invited to a lunch which was sponsored by the Classics Department's Friends of Classics Fund.  Thomas wrote a thank-you email to "the cool and fun Classics Department" thanking them for the "savory sandwiches".  The mother of another student felt that the "lunch was wonderful and gave [them] a chance to socialize and talk about what [they] learned with [Connors]."

"I thought of the idea while I was taking Astronomy 101 last quarter.  I talked with Professor Laws and within weeks they had me trained," commented Brodhead, noting the help and accommodation which the Astronomy Department provided for the trip.

Many parents expressed gratitude for the memories that the University was helping to build.

"When I first began teaching [the students] almost a year ago, I asked how many of them wanted to go to college.  Only a few [students] reluctantly raised their hands.  When I asked them again, after the trip, a room full of hands instantly shot up," Said Brodhead.  "I call that a success."

By approximation, over 40 people, comprised of students, siblings, parents, and friends, joined the experience.