An Open Letter from the AY19-20 Lederman Endowed Scholarship Recipient 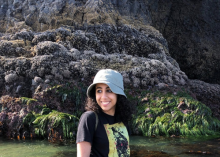 I write to express my sincere gratitude for the scholarship that your family has awarded me, and to detail some of the experiences I have had over the past term, which in many ways were facilitated by the Thomas A. Lederman Endowed Scholarship.

The study of humanities has been the center of my time at the University of Washington. Nearly every morning, with a cup of steaming tea in hand, I trudge through the crisp sunlit fog to Denny Hall’s classics seminar room. There, surrounded by shelves of Greek and Latin literature, maps of old empires, and a row of gleaming statues, I find myself at a rare intersection between the past and the present. Ancient Rome, characterized often as a dead civilization with a dead language, breathes life in that room.

When I first came to the University of Washington nearly three years ago, I enrolled in Latin. I hoped the language would assist me with legal terms in law school, but it was instantly evident that the modern world parallels the classical era in many ways beyond language. Our Constitution operates on core republican principles. Our government operates in much the same way. However, the similarities delve deeper: classics reveal that our core human nature has remained unchanged over the last three millennia.

In his famous funeral oration, the Athenian general Pericles praised courage and loyalty -- qualities that we still venerate today. When Aristotle wrote On the Soul, his curiosity, passion for science, and fascination with the universe single-handedly connected all living things. Despite their western origin, I believe these stories and values transcend race, religion, and gender. They evoke our primal humanity. When we study classics in the twenty first century, we not only study archaeology, language, and art, but we learn what it means to be human. Given the divisive nature of our current world, a reminder of our unity with the past -- and with each other -- is an effective medicine.

I begin my day in Denny Hall reminded of these important connections. Time is only measured by how much tea is left my flask. It’s a quiet, peaceful place. If the windows are open, paper on tables will rustle with a cool morning breeze -- the only movement in the room. Sometimes, I do my philosophy homework there. This past term, I took an epistemology class, which was a rigorous intellectual challenge. I spent hours in Denny pouring over philosophers as far back in time as Plato and as recent as the professor teaching the class. In much the same way as Pericles or Aristotle, the study of knowledge shows me that people of the past aren’t as different from us as we’d like to think. This quarter, I read passages presenting similar philosophical problems from Ancient Greece, Persia, China, and India. We ask similar questions. We struggle to find answers. We are united across culture in our relentless search for understanding.

Studying the humanities grounds me in ways that other disciplines cannot. Cleopatra became Pharaoh when she was eighteen years old. Octavian, Julius Caesar’s heir, orchestrated an army when he was nineteen. The poet Lucan began his epic Civil War at twenty-one. Before attending the UW, I could never empathize with a notorious Hollywood antagonist like Octavian. But after reading his story and learning that just like me, he was once a vulnerable teenager trying to survive the chaos of his day, I found yet another connection to the past. Like me, these individuals had to learn and grow, and like me, they wanted to make a difference in their world. As silly as it might sound, reading about how young some of our ancient heroes were when they took on roles of responsibility gives me comfort that I can do the same.

Storytelling is a large part of my life and my study at the University of Washington. My childhood goal was to publish my first novel before the age of eighteen, which I accomplished the summer before I started college. Now I write novels in my spare time, and the seminar room is the perfect place for me to craft dialogue or create a character between classes. I’m currently working on two novels: one about the complicated Roman general Sulla, and one that adapts the Ramayana, a Hindu epic, for a western audience. My love of history and historical fiction is largely shaped by what I study. It excites me when I hear about a person (Sulla, for example), in class for the first time and immediately set out to share his or her story with the rest of the world.

While I will soon head off to law school, I will never abandon my love of classics and the humanities more generally. If anything, I hope that I can one day visit ancient sites not just in the Mediterranean region but in my country of heritage, India. I am thankful that I got to find a period of history that captured my heart and that I could pursue my interests so ardently. To be able to study what I love on such a beautiful and inviting campus is a genuine privilege. Ultimately, I want to thank you and your family for the financial support this year. Not only does it help me pay for tuition, but it also validates studying the humanities in my mind and the minds of my peers. I am thankful for all that the Thomas A. Lederman Endowed Scholarship has done for me, and I look forward to what the future has in store.