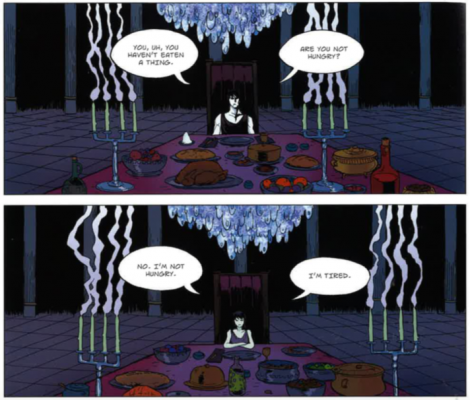 Sophie Emilia Seidler, in the department on a 2019-20 Fulbright Scholarship from Austria, has won the ‘Gender and Agency Award’ of the Universität Wien for her 2019 Vienna MA thesis in Comparative Literature. Her title was
Hunger nach Individualität.  Strukturen einer anorektischen Poetik im Persephone-Mythos [‘Hungry for Individuality: Anorexic Poetics in the Myth of Persephone’]. Her thesis explored aspects of the Persephone myth in the Homeric Hymn to Demeter, in Ovid’s Metamorphoses and Fasti, and in contemporary adaptations by the Swedish poet Lotta Olsson and the American graphic novelist George O’Connor.

Sophie writes: “Persephone’s myth exemplifies the close relationship between two psychosomatic phenomena, symbolized by the highly eroticized motif of the pomegranate: food and sexuality – and their denial. Persephone’s story is structured by patterns of fertility, desire, appetite, refusal to eat and denial of sexual maturity, rape and forced feeding, starvation, and abundant nutrition. Denying food, being fed, and finally eating transform her into a powerful goddess. Far from anachronistically ascribing symptoms of modern eating disorders to ancient mythological characters, my approach illustrates the anorexic logic inherent in the plot, which embraces questions of femininity, sexuality, motherhood, change, and re-birth.”

With us, Sophie is studying for a second MA, this time in Classics, with a new thesis topic that sounds no less compelling than her first one: Monstrous Texts and Textual Monsters. Alterity, Hybridity, Disability, and the Abysses of Poetic Imagination in Ovid’s Metamorphoses and Gospodinov’s Physics of Sorrow.