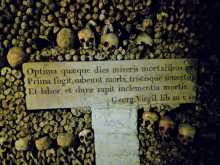 At the end of December 2018, undergraduate Classics major Rose Bugel-Shunra (BA '19) traveled to Paris to participate in the 'Living Latin in Paris' program sponsored by the Paideia Institute.  She was supported in this endeavor by an award from the Classics Student Travel Endowment Fund, which allows us to provide substantial financial assistance to undergraduate and graduate students to cover travel costs and more in connection with their participation in programs abroad and other endeavors.  (The anonymous donor who made this endowment possible has made available $25,000 in matching funds, so please consider making a donation to help us reach that goal.  You'll find the Classics Student Travel Endowment described and listed, together with our other funds, HERE.  Any amount, large or small, is welcome, and bear in mind that whatever you are able to give will be matched.)

Rose very kindly agreed to share with our readers her splendid report of the experience:

"The Paideia Institute’s Living Latin in Paris program was an opportunity to approach a classical language in many of the ways modern languages are learned. The immersive experience of the LLiP came about from a combination of sight-reading and speaking in Latin. Throughout the weeklong program, students explored sites that were historically relevant to Paris’s Latin-speaking past. To familiarize ourselves beforehand, we would sighttranslate primary sources related to the area, usually while standing outside in subfreezing temperatures. As the program’s focus was primarily on medieval Latin, a number of the sites visited were cathedrals and churches, with reading material coming from ecclesiastical sources. Once inside, we were able to explore the locations and read more Latin in situ, typically in smaller groups accompanied by our instructors. Please imagine four students peering at the stained glass of Saint Denis in order to read eye-wateringly tiny inscriptions. It took ten minutes before someone realized that looking at the actual images might lend some helpful context.

Beyond the practice in translating without dictionaries, LLiP challenged its students to speak in Latin. Possibly even harder, we also had to listen. On the first day, the moment I truly realized what I had signed up for was when we walked into the Cluny Museum’s exhibit on its Lady and the Unicorn tapestries. The instructor turned around to us and said “Omnes audite! De unicornibus…”  As part of our learning experience, students were encouraged to ask questions in Latin as much as possible, and even after classes officially ended each day, we would often meet in local bars to continue practicing conversational Latin with planned activities. One night was spent solving riddles, a game infinitely more frustrating when one has figured out the answer, but is lacking the crucial vocabulary to express it.

Living Latin in Paris was a deeply rewarding program that has changed entirely my relationship with Latin. I have a broader understanding of its use through my exposure to its role in the post-Classical world, and a sense of familiarity with the language that I would not have without ever trying to speak it. My connection to Latin has been enriched and strengthened by LLiP, and I believe I will continue to notice the difference for a long time to come."