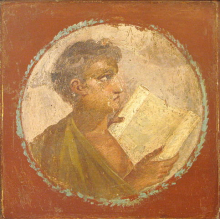 Recent months have seen the appearance of many lively and innovative publication projects by PhD, MA and BA alumni of the UW Classics Department.

Yurie Hong's “Playing Zeus: Reproductive Technology and Lessons from Hesiod” has appeared in the online journal Eidolon. Yurie, PhD 07 and Associate Professor of Classics at Gustavus Adolphus College, examines myths of the birth of the goddess Athena as explorations of issues relevant to modern decision making about reproductive technologies and reproductive justice; she wrote the essay on as a result of her involvement in planning the College's upcoming Nobel Conference on Reproductive Technologies.

Alex Dressler's research on the intersection of philosophy and literature and the gendering of personhood in Lucretius, Cicero, and Seneca has been published by Cambridge University Press as  Personification and the Feminine in Roman Philosophy (2016). Alex, PhD 09, is Assistant Professor at the University of Wisconsin.

Ryan Platte, PhD 08 and Associate Professor of Instruction in Classics and Director of Greek Instruction at Northwestern University, has published Equine Poetics (Harvard University Press 2016), an analysis of the representation of horses and horsemanship in early Greek epic and lyric poetry.

Pauline Ripat, PhD 03 and Associate Professor of Classics at the University of Winnipeg, works on magic in Roman culture and has recently published "Roman Women, Wise Women, and Witches," in Phoenix 70. no. 1/2 (2016)

Naomi Campa's research on Athenian democracy is to appear soon as  “Positive Freedom and the Citizen in Athens” in Polis 34.1. Naomi, PhD 14, is Mellon Postdoctoral Fellow and Visiting Assistant Professor of Classics at Oberlin.

Brandon Jones, PhD 15, has spent 2016-17 as Assistant Professor at the Inter-Collegiate Center for Classical Studies in Rome; his "Cassius Dio: Pepaideumenos and Politician on Kingship" has appeared in Lange and Madsen (eds.), Cassius Dio: Greek Intellectual and Roman Politician (Brill, 2016).

Melissa Haynes, BA 97, PhD Harvard 08, Visiting Assistant Professor at Bucknell University, has published Heinrich Kaan's "Psychopathia Sexualis" (1844): A Classic Text in the History of Sexuality (Cornell University Press 2016), the first translation into English of this work, published in Latin in 1844; the work was featured in Inside Higher Ed.

Vince Tomasso, BA 04, PhD Stanford 10, and assistant professor at Trinity College Hartford, explores ancient and modern reactions to Homer. His "Rhapsodic Receptions of Homer in Multiform Proems of the Iliad" has appeared in American Journal of Philology 137 (2016) and his “Classical Antiquity and Western Identity in Battlestar Galactica” appeared in Classical Traditions in Science Fiction, edited by Brett Rogers and Benjamin Stevens (Oxford University Press, 2015).

John C. Franklin (MA 1995, PhD University College London 2002) is Associate Professor of Classics at the University of Vermont. His wide-ranging researches into muscal technologies and practices in the ancient world have produced Kinyras: The Divine Lyre a publication in the Hellenic Studies Series of the Center for Hellenic Studies.

Finally, we are delighted to congratulate Jerry Kohl, Secretary of the Department of Classics, on the publication of his Karlheinz Stockhausen: Zeitmaße. Landmarks in Music Since 1950. Routledge (2017).

We welcome all news of other projects, and updates sent to clasdept@uw.edu will be gratefully received.