Gods and Mortals and Adriana Vazquez in Malibu 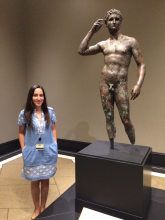 Graduate student Adriana Vazquez won a spot to participate in the 2016 Society for Classical Studies (SCS) Summer seminar in material culture, entitled "Gods and Mortals in Ancient Art." The seminar was hosted by the Getty Villa in Malibu, California, supported by a grant from the Getty Foundation. Adriana joined nine other graduate student participants from various institutions under the direction of Professor Bettina Bergmann of Mount Holyoke College. 'A Voice from Beyond', her project for the seminar, explored the context and significance of tiny ancient gold tablets that contain instructions for souls to follow as they enter the underworld. She reports that the chance to spend time working with objects created to express religious beliefs brings a new dimension to her dissertation, Vates and initiates: Augustan Poetic Manipulation of Greek Mystery Cult, a study of  the many ways in which Roman authors refer to such religious practices in their poetry.