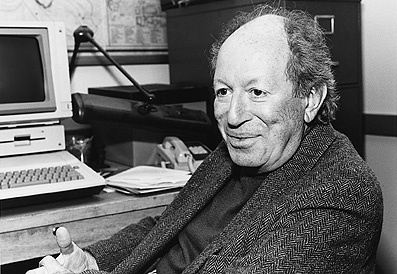 With great sadness we report that our dear friend and colleague, Emeritus Professor Paul Pascal, passed away on May 11.  As all of Paul's many friends, colleagues, and students are aware, Paul was a remarkable teacher and scholar.  We are grateful to Janet Pascal, Paul's daughter, for sharing the splendid account of Paul's life we quote here:

Paul Pascal died on May 11, 2015, at the age of 90. He was born on March 26, 1925, and grew up in Brooklyn, New York, so close to Ebbets Field that he used to listen to the Dodgers baseball games from the roof of his building. He attended Erasmus Hall High School, where he won the New York City-wide spelling bee and almost every medal the school had to offer, and acquired a lifelong love of Latin. He also met his future wife of 66 years, Naomi, there.

His study of classics at the University of Vermont was interrupted by World War II. In basic training, he earned a sharpshooter medal, before the army sent him to study Japanese at the University of Chicago. He was then stationed in the Philippines, and used his language skills to tell Japanese guerilla bands that the war was over.

Returning home, he graduated from the University of Vermont in 1948. He and Naomi were married later that year and moved to Chapel Hill, North Carolina, where Paul studied with the renowned classics scholar B. L. Ullmann, writing his dissertation on Renaissance humanist Sicco Polenton.

In 1952, Paul won a Rome Prize Fellowship, and he and Naomi spent the year at the American Academy in Rome. He came to know every street and alley of the city by heart. At the academy, the couple became part of a circle of distinguished artists, authors, and musicians. Paul and poet Anthony Hecht collaborated on the creation of a new form of light verse, the double dactyl, which led to the publication of Jiggery-Pokery: A Compendium of Double Dactyls. Before returning home, he and Naomi toured Europe in their miniature Fiat, “Toto,” camping by the roadside.

In 1953, Paul earned his PhD and was hired for a one-year appointment at the University of Washington. He and Naomi drove across the country to Seattle and never left. Paul taught at the university for 38 years, retiring in 1991. Generations of students remember him as one of the most entertaining, witty, and erudite teachers on campus, as well as for his annual Eruption of Mount Vesuvius picnic. In 1987 he was presented with the university’s Distinguished Teaching Award.

Paul loved to share his enthusiasm with the community. He lectured all around the U.S., toured Washington as part of the Inquiring Mind Lecture Series, and developed several lectures that he presented to groups around Seattle. Perhaps the best-loved of these was “Classical Seattle,” which explored unexpected traces of classical antiquity in the city. He adapted this lecture for several other cities, including Vancouver. He visited high school Latin classes and volunteered as a Latin tutor at Fred Hutchinson Cancer Research Center.

After his retirement, Paul led popular tours of Rome and Italy. When Naomi traveled to Changchun, China, to give a seminar on university press publishing, he went with her. Discovering that the only institute in China that taught Greek and Latin was located in Changchun, he gave a series of lectures there and taught the students to sing medieval Latin poetry to the tune of “Yankee Doodle.”

Besides the classics, one of Paul’s major loves was music. Shortly after his marriage, he learned to play the flute, and for the rest of his life he was an avid chamber musician. He convinced many of his friends to take up again the forgotten instruments they had learned in high school, so that they could play duets with him.

He leaves behind his son David, daughter-in-law Susan, and daughter Janet.

Donations in Paul’s memory may be made to the Jim Greenfield Endowed Classics Scholarship, supporting undergraduate and graduate students of the Classics, online at  giving.uw.edu/ClassicsGreenfield or by mail to Professor Alain M. Gowing, Chair, Department of Classics, University of Washington, Box 353110, Seattle WA 98195.