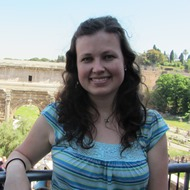 We are proud to announce that recent UW Classics PhD Lissa Crofton-Sleigh is the winner of the Oxford Archive of Performances of Greek and Roman Drama's Ars Longa Prize for 2014. This year's theme (chosen to mark the 150th anniversary of Strauss's birth) was the relationship between Richard Strauss's opera's and Greek tragedy. Dr. Crofton-Sleigh was awarded the prize for her essay, "Helen with the Blue Dress on: Strauss' Die Ägyptische Helena", a study of the representation of Helen in Strauss' opera. She originally wrote it for Professor Ruby Blondell's seminar on Helen of Troy, and has since presented it at "Re-Creation: Musical Reception of Classical Antiquity," a 2011 conference at the University of Iowa, which won the SCS Outreach Prize from the Society for Classical Studies. The prize-winning essay, a revised and lengthened version of what Dr. Crofton-Sleigh presented at the conference, is available for download here: http://www.apgrd.ox.ac.uk/about-us/programmes

Dr. Crofton-Sleigh graduated from the UW in June of 2014, after successfully defending her dissertation, The Building of Verse: Descriptions of Architectural Structures in Roman Poetry (directed by Professor Catherine Connors). She is currently teaching at Santa Clara University in California. Her article on Hercules as Roman landscape agent, entitled "The Mythical Landscapers of Augustan Rome," is to appear in Landscapes of Value: Natural Environment and Cultural Imagination in Classical Antiquity (eds. J. McInerney and I. Sluiter), the peer-reviewed proceedings of the 8th annual Penn-Leiden Colloquium, which is forthcoming with Brill.