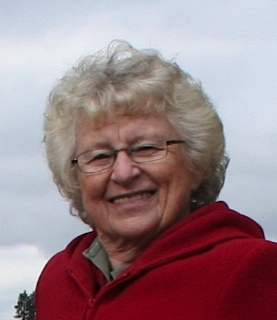 We thought you'd all enjoy reading this fascinating account from alumna Bobbie Sahr about her time here at the UW and her experiences with Department of Classics and beyond:

Bobbie Sahr (née Smith) graduated from the UW in 1960 with a BA in Education (fulfilled at that time with Latin courses), with minors in French and History.  Bobbie, who has kept many of her Latin texts throughout the years (and admits to writing translations in them, as we all have!), recalls her time here fondly:

“The Classics Department was delightful.  I had Dr. Grummel for the majority of my classes and thought he was the epitome of the absent-minded professor.  Sometimes, for our grammar classes, which were held at noon once or twice a week, Dr. Grummel would not show up.  We'd wait the usual twenty minutes, then one of us would take turns to go to his office to see if he was there.  Usually he would be there, feet up on his desk (piled high with papers), leaning back in his chair, smoking his pipe and looking up at the ceiling.  He would be startled to be reminded that this was the day of the class, then hasten down the hall to finish off the hour with us.”

In addition to working with Dr. Grummel, Bobbie was fortunate to have worked with Paul Pascal and John McDiarmid—the latter of whom was, during her time here, Department Chair.  During her undergraduate studies in the Classics Department Bobbie fulfilled her student teacher requirements as a Latin teacher at Roosevelt High School, even as she prepared for a June wedding to John R. Sahr, who was completing his dentistry studies at the UW at the same time.

In the years between 1956 and 1960 Bobbie remembers relatively small Latin classes of “about eleven students” on average, a welcome relief from her Education classes, which always seemed much larger and more impersonal.  Bobbie also recalls the opportunity to take a course on Tacitus from a visiting scholar from Germany—even then, Classics showed its strengths in small classes and world-class scholars.

Following her graduation, Bobbie was hired to teach Latin at Bothell High School.  This was a post she held for the 1960 – 1961 school year.  She had been hired to hold the position for at least two years, but due to a pregnancy—in the early 1960s, high school teachers were not allowed to show their pregnancies—she barely finished out the school year (“I was wearing the same dress for the last five days!”).

In early October of 1961, Bobbie and John R. welcomed the arrival of John D. Sahr (now the interim chair of UW Electrical Engineering), but Bobbie was not able to return to work because young John was “such a colicky little twerp, nobody was getting any sleep!”

“We started a Latin club and in the spring I organized a Roman Banquet and celebration to finish off the year.  We all wore togas, and a few other teachers came in togas!  Some of the students played the role of slaves, who carried in a roast pig on a big platter that I had had baked at a restaurant in Bothell…apple in mouth and maraschino cherries for eyes. Vegetables and lettuce arranged around the pig. We ate with our fingers…Ha!  We had grape and apple juice, loaves of bread which we ripped chunks off of, and some kind of salad.  The coup at the end was when my students put on a play in Latin, complete with chariot (wheel barrow).  It was too funny.  I wore my toga for Halloween for years!”

After John R. finished his work in dentistry, he joined the army and the young family moved to Ford Devens in Massachusetts.  Some years later, the family returned to Yakima, where John R. set up his dental practice; shortly thereafter the family settled in Selah, where Bobbie found herself again drawn to the classroom:

“When I went back into teaching after staying out for about fifteen years, I was assigned a variety of Selah High School English classes—and found myself frequently bringing Latin into a lesson.  In the meantime, I had returned to school and earned an MA in Gifted Education; and subsequently lobbied for, and achieved, an advanced Freshman English class added to the curriculum for kids who had been in the gifted curriculum in grade school.”

During her time working in Gifted Ed at Selah, Bobbie frequently brought her Latin studies at the UW into the classroom:

“At one point in time I even gave a 5-10 minute Latin lesson at the beginning of my Advanced Freshman English classes for a trimester.  I scrounged up about 20 Latin I books from the "dead" book closet and had fun introducing Latin to them.  […] In all the different subjects I taught, it was surprising how many times Latin became an anchor in a teaching moment”

With her K-12 teaching certificate, her MA in Gifted Ed., and her background in Latin, Bobbie taught broadly during her Selah years.  In addition to teaching French for some time, she initiated an Academic Decathlon program, as well as a popular course on Pacific Rim Literature. Recalling her time at the UW Classics Department, and the overarching impact of this on her life, Bobbie concludes:

“Latin is no longer something I ‘do,’ but it remains part of who I am.”