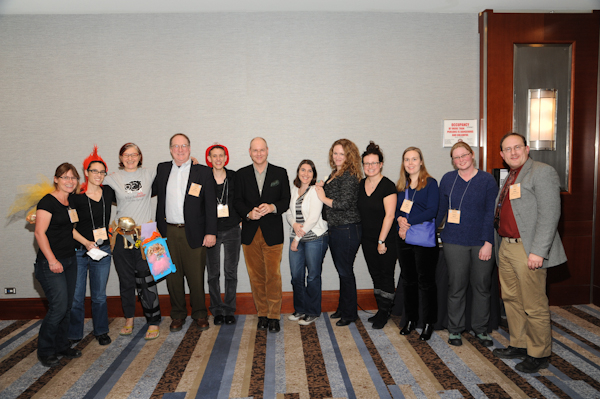 NB: Since we first posted this story on January 27, a splendid article on the Department and its efforts to achieve diversity has appeared in the March 2014 issue of Perspectives, the Newsletter of the College of Arts & Sciences (click here for the story) as well as an article in the March 10 issue of Daily (click here for that story).

We are proud to announce that the Department of Classics at the University of Washington has been chosen to receive the first ever Award in Professional Equity from the Women's Classical Caucus, a group affiliated with the American Philological Association (the North American professional association for Classical Studies). The photo shows members of the department--present and former--who were present when the award was announced, to an enthusiastic crowd, on January 2nd at the annual meeting of the APA in Chicago.

This award was established by the WCC to honor a department or larger institutional unit and recognize their policies and leadership in the area of professional equity, diversity development, and workplace flexibility. In making the award to the University of Washington's Classics Department, the WCC leadership cited the department's scrupulous fairness towards all genders in procedures for faculty hiring and promotion and in the treatment of contingent faculty and students; its emphasis on recruiting and retaining a diverse population that includes sexual, ethnic, and racial minorities; its support for all genders in ways that respect their roles as parents, partners, and spouses, including flexible scheduling for faculty and students who are parents and/or involved in long-distance relationships; and its sympathy for feminist values and familiarity with feminist concerns and methodologies. 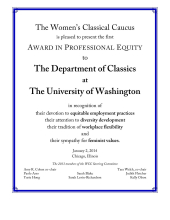