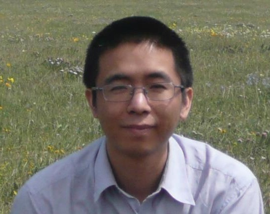 We are delighted and excited to welcome to the Department for the 2012-13 academic year Visiting Fulbright Scholar Professor Yongyi Li of Chongqing University (China).  More about Professor Li:

Prof. Yongyi Li obtained his PhD in American and British Literature from Beijing Normal University, where he taught between 2003 and 2009. Since 2009, he has been teaching at Chongqing University. During the 2012-2013 school year, he will be a Fulbright research scholar at the Department of Classics, University of Washington. His major fields of inquiry include Romantic and Modernist poetry, Roman poetry of the Golden Age, Derrida’s relation with Western intellectual history, and literary translation. He has been the recipient of China’s National Grant for Social Sciences and Humanities (2011) and the Loeb Classical Library Foundation grant (2008). He has published an annotated Latin-Chinese version of Catullus’ Carmina and a monograph on the same poet. He has also translated ten books from English and French into Chinese, including L’oiseau bleu, The Jungle Book, The Call of the Wild, The Old Man and the Sea, and two Oxford Very Short Introductions (to Descartes and to Machiavelli). His numerous articles have appeared in China’s scholarly journals, among them more than ten on Catullus.

His Fulbright research project titled “Catullus and Twentieth Century American Poetry” aims to reveal how Catullus’ protean, inexhaustible art has inspired and informed generations of American poets in their exploration of new aesthetics and new languages that meaningfully respond to changing social contexts and spiritual climates. More specifically, it will try to answer the following questions: Which poets are influenced by Catullus in their poetry or poetics? What aspects of Catullus appeal to these American poets? How can he attract both Modernists and postwar poets when they disagree on so many issues? How has Catullus changed or helped change American poetics? How is Catullus (and Rome) relevant to America in the twentieth century? Why do these poets tend to identify with Catullus rather than with Virgil, Horace, or Ovid? At this stage, twelve candidates have been chosen: Ezra Pound, Robert Frost, Hart Crane, Wallace Stevens, Marianne Moore, E. E. Cummings, Allen Ginsberg, Robert Lowell, John Berryman, Sylvia Plath, Louis Zukofsky and Kenneth Rexroth.