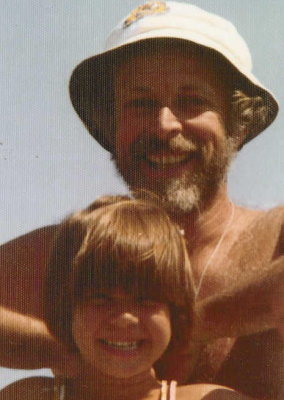 Jim Greenfield, Meg's beloved older brother, was born on August 10, 1928. Jim's and Meg's father Lew, the only American-born child of the large Russian-Jewish immigrant family from Philadelphia, had settled in Seattle in 1920. In 1924, Lew charmed the beautiful and brilliant Lorraine Nathan of Chicago into marrying him and moving to Seattle.

Jim and Meg grew up on Crescent Drive on Seattle's Capitol Hill in a closely-knit neighborhood with lots of kids -- many of whom remain family friends to this day. Jim attended Stevens Grade School and Garfield High School where he played baseball and developed a lifetime love of sports. Lorraine tragically died in 1942, cementing an unusually strong bond between Meg and Jim. Meg and Jim spent many summers together in Los Angeles visiting their Aunt Rolly, Lorraine's sister, generally causing trouble and having fun.

After attending the University of Washington and the University of Southern California, Jim joined his father in the family art, antique and fine furnishings auction business, Greenfield Galleries, in downtown Seattle. Greenfield Galleries was the premier gallery of its kind in the Pacific Northwest, and Jim was a recognized expert appraiser. The monthly auctions at Greenfield Galleries were considered one of the best shows in Seattle, with Lew and Jim charming the crowd and keeping up the patter. Jim married twice, first to Carol Cheim of Tacoma and second to Sharon Stolt of Seattle, and had five children: Lorraine, Jim Jr., Megan, Robin and Adam.

Jim was an active sportsman and showman. As a young man he raced his Alfa Romeos on the weekends and just before he died in 1973 he sponsored a boat, the Ms. Greenfield Galleries, in the Seafair hydroplane race. (The first "Ms." hydroplane in history.) Jim acted professionally at the Cirque Theater in Seattle's Madrona neighborhood, appearing in My Fair Lady, The Fantastics and The Miracle Worker, among other shows.

He was also very active in the community, coaching junior league football in Seattle's inner city from 1964 until his death. He mentored many young, underprivileged men and devoted countless hours to their well being. His teams were perennial champions as Jim brought to junior league football innovation and intensity worthy of the NFL. Active in PONCHO, Seattle's arts support organization, he served as auctioneer at many of PONCHO's annual fundraisers. He was also active with the Unlimited Hydroplane Racing Committee and helped organize the Seafair race for many years.

Jim and Meg enjoyed an exceptionally close friendship all of their lives. There were scores of gags and jokes passed between them and Jim continually sent to Meg the most unusual items that came through the Galleries. Meg often recalled a certain, particularly ugly, life-size glass bead parrot-lamp that not so mysteriously found its way from Seattle to Georgetown one year. Jim delighted in Meg's success as he proudly watched her rise from the junior ranks of The Reporter magazine to, even in his lifetime, one of the most influential journalists in the nation.

Unlike his sister, Jim was not a Classics scholar. He would likely be amused at how Meg has chosen to honor him. But Jim understood how young people blossom and achieve great things with a little help and encouragement. He would be exceptionally pleased and proud of the Jim Greenfield Scholarship program.