In Memory of Elizabeth H. Boba 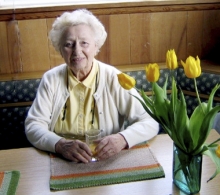 On December 21 of last year Mrs. Elizabeth Boba, former administrative assistant and undergraduate adviser in the UW Classics department, passed away at the age of 100 in Seattle. She began her career in this position during the mid 1970s and continued until March 1988.

Elizabeth had a longstanding interest in Classics, going back to her role as 1937 Consul of the Latin Club in the E. C. Glass High School of Lynchburg VA and continuing at Illinois College and finally at Sweet Briar College, where ‘Libba,’ as she was called by friends, was an English major and a member of the Classics Club. The senior write-up about Elizabeth in the 1941 Sweet Briar yearbook describes her as “steady, thoughtful and gentle,” the very qualities she always manifested during her time with our department.

One of her outstanding strengths was a life-long familiarity with the academic world. She knew how to deal with the many campus offices and administrators.  Her father, Harris Gary Hudson, was a Rhodes Scholar who took his undergraduate degree at Oxford and his Ph.D. at the University of Chicago. He taught history at Sweet Briar College and then served as president of Illinois College from 1937 to 1953. Imre Boba, Elizabeth’s husband, became professor of history at the University of Washington. She and Imre met in the 1950s when working for Radio Free Europe in Munich.

While the Classics Department is modest in size, Elizabeth’s wider life experiences gave her a great depth of professional skill. She knew her way around the university and was thus able to get things done for the department. She understood, supported and helped the department achieve its long-term aspirations. And Mrs. Boba, as the students of those days always called her, was an outstanding, always cordial undergraduate adviser, whose priority was to be available to Classics majors and minors whenever they had need of her help.

Graduates and faculty of years past will always remember Mrs. Boba with much warmth and gratitude. Her daughters have written a wonderful obituary which appeared in the Seattle Times on January 3, 2021 and which we wish to cite in its entirety:

Our mother was born 100 years ago in Newton, MA, to Ruth Carmer Hudson and Harris Gary Hudson. In 1954 she married Imre Boba, a Polish-Hungarian refugee, in Munich, Germany. Two daughters were born there. The young family moved to Seattle where Imre became a history professor at the UW.

Elizabeth had a varied career, including work as a code breaker at Arlington Hall, in Washington D.C., where she worked on both Japanese and Bulgarian ciphers. In the 1950s she worked at Radio Free Europe in Munich, where she met our dad. Finally, she spent 13 years as Administrative Assistant for the Classics Department at the U.

The Bobas traveled to Europe many times before Imre's death in 1996. Elizabeth also enjoyed playing the piano, attending the Opera, and keeping in touch with friends and relatives far and wide. Family include daughters Eleanor (Alan) and Leslie; grandchildren Gary and Alida.

No service is scheduled at this time. Memorial donations may be made to the "Friends of Classics" Fund at the UW: classics.washington.edu/support-us.