CLAS 410 A: The Classical Tradition 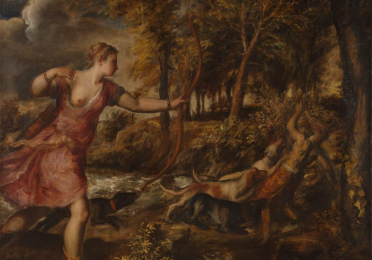 {preliminary syllabus only: now replaced by info on front/home page}

The Greek and Roman imagination has fed literature, art and thought in the Western world and beyond from antiquity until today:  the god and the hero, the warrior and the wanderer, the lover and the schemer, the statesman and the dissident, the city-builder and the seeker of rural fantasy ...  Poets, artists, thinkers and doers, all stake-holders in the Classical Tradition.

Presupposing no prior study of what we know as classical antiquity (a shorthand term for the ethnically diverse and multicultural worlds unified by the use of the Greek and Latin languages on all sides of the Mediterranean Sea from about 1000 BCE/BC to 500 CE/AD), the course will offer the opportunity to explore conversations across centuries between ancient and modern texts and ideas, especially in poetry but in other genres and in other media too.  For classicists like myself, antiquity ends in the 5th or 6thcentury CE, and on some definitions modernity begins as early as the 14thcentury CE; in between lie the Middle Ages (the medieval period), whose boundaries are themselves negotiable.  Although this class will pick and choose its particular objects of study, in principle no period of culture influenced by ancient Greece and Rome is irrelevant to our investigation.  What will unify our explorations are, first, a grounding in ancient Greek and Roman texts and ideas and, second, our own perspectives as 21stcentury readers living in increasingly diverse and interconnected societies, trying to make sense of conversations across two and even three millennia of Western culture and to put them in conversation with other world cultures and traditions on which they have had an impact, including our own.  ‘Classical’ and ‘tradition’ are both highly loaded terms: to study the Classical Tradition is to investigate, and to be ready to problematize, a long history of cultural appropriation and identity formation.

Readings and assignments will come from two major sources:

(1) A required textbook, R. DeMaria and R.D. Brown, Classical Literature and its Reception: An Anthology(2007): available at U Bookstore

(2) A course web-page on CANVAS, to which materials will be added throughout the quarter.

Midterm and final exams, based on the assigned readings.  One short term paper (3-4 pp. double-spaced).

We will meet twice a week, for sessions of 1 hour and 50 minutes.  Typically, this large block will be broken into two 50 minute periods, with a ten-minute break in the middle.  Often, I will present material in one period, and in the other there will be a mix of teaching with in-class reading, discussion and response.

I will guide you throughout in your exploration of the assigned readings, without presupposing prior knowledge of text or context; a written outline will accompany each class session. The readings will cover many centuries and cultures; I will tend to choose short and pointed texts rather than long and expansive ones.  The elements on my syllabus have been road-tested on students from all across the university:  all that you need is a commitment to read actively and with open minds.

Some topics to be covered:

Transformations of mythic story-telling in literature and painting

New worlds: the Greek and Roman undertow in early modern exploration and colonialism

Some authors to be sampled:

Catalog Description:
Study of the Classical Tradition, including the reception of ancient Greek and Roman texts, objects, and ideas within the history of Western literature, art, thought, and scholarly disciplines. Exploration of its interrelationship with the ethos of the various ages in which significant developments occurred. Offered: AWSp.
GE Requirements:
Visual, Literary, and Performing Arts (VLPA)
Credits:
5.0
Status:
Active
Last updated:
October 17, 2019 - 8:45am
Share